Earth Watch: Hope for a Thirsty World - How grass-fed cows can help restore health to the water cycle

The ecological impact of raising cattle—and by extension, of eating beef—has become a fraught topic. One frequent concern is that meat production uses a lot of water and creates water pollution. What often gets lost, however, is that the impact varies greatly depending on how cattle are reared. As nutritionist and author Diana Rodgers puts it, “It’s not the COW, it’s the HOW.” There’s a metric called the “Water Footprint” intended to reveal how much water is required to produce different foods, and beef is deemed particularly thirsty, but it’s important to understand that these figures refer to CAFOs, or concentrated animal feeding operations. 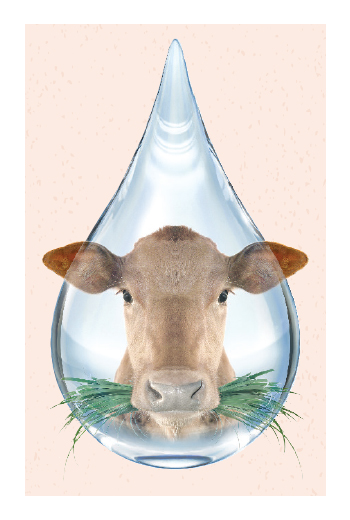 As for water quality, consider the feedlot: cattle are confined and their waste runs into lagoons. This fouls area water—particularly when heavy rains lead to overflow—and creates the ideal conditions for increased production of methane. (All ruminants emit methane as part of their digestive process; however, healthy grassland soil contains methane-eating bacteria, so methane is kept in balance.) When cattle are on pasture, their waste is broken down by microorganisms and enriches the soil. This, plus the organic matter added when cattle move as a herd and trample down plant material, bolsters carbon in the soil, which acts as a sponge. According to the USDA, every one-percent increase in soil organic carbon represents an astounding 20,000 gallons of water per acre that can be held on the land.

In other words, it’s not that cattle reared and finished on grass are “using” the water so much as that they are playing a role in the local water cycle. When cattle are managed in a way that builds healthy soil, they are adding water to the system—water that would otherwise be lost to evaporation or sluice away in gullies or slide across lifeless dirt, in the process dragging along topsoil that ends up as sediment in our waterways.

To understand the paradox of why cattle can lead to more water on the land, we can go back in time—way back, as in millions of years ago, during the expansion of grasslands, a category of landscape that represents about a third of the world’s land mass. Scientists believe that grasslands and grazing animals co-evolved, so that the land needs the animals in the same way that the animals need the land. Herbivores nibble on grass in a way that promotes plant growth. However, the specter of predators keeps them moving so that grasses are not eaten down to the ground. The grazers evade pack-hunting predators by bunching up and fleeing en masse, pressing down seeds and plant residue in the process. This predator-prey relationship is essential to grassland health, particularly in ecosystems where there are distinct dry and rainy seasons, which need some mechanism to maintain moisture in the soil from the end of one rainy season and the beginning of the next.

Holistic Management, a system of raising cattle that mimics this natural relationship, can play a role in enhancing water cycling in any landscape. Natural Grocers’ main supplier of 100% grass-fed beef is Matt Maier, owner and “Chief Grass Farmer” of Thousand Hills.™ “We’ve watched this terrain get plowed and tilled and planted with corn and soybeans for decades,” says Maier, who has returned to the land his father bought in 1959. “Most of the topsoil and whatever it’s been treated with has been washed into wetlands, streams, and ponds, whatever is at the bottom of the hill.” To avoid this scenario the land needs to be covered with forage all year. “We’re putting organic matter back into the soil. This captures water like a sponge and holds that water for the plants, and the plants keep the soil in place. Let the cattle do all the work—you just have to manage them properly. Regenerating soil is the mission. The byproduct is nutrient-dense food. If we don’t have vibrant soil, we don’t have a food system in this country.”

The information in this article is based upon Judith Schwartz's book Water in Plain Sight: Hope for a Thirsty World (St. Martin's Press, 2016).