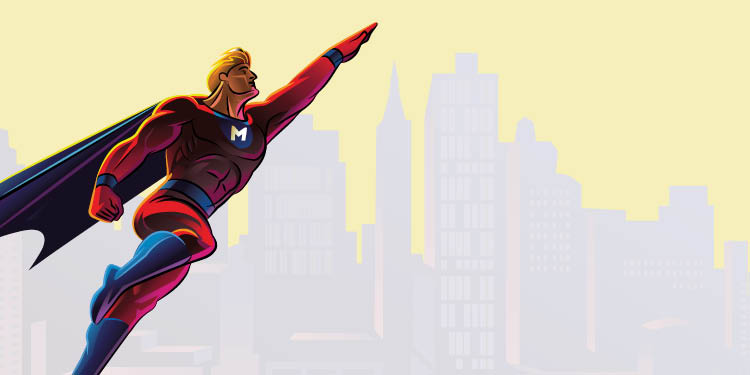 Over the last 60 years or so, symptoms of anxiety, depression, and attention deficit hyperactivity disorder (ADHD) have steadily increased, particularly among children and young adults, and American adults appear to be experiencing the burden of stress, anxiety, and depression more than ever before.

It is interesting to note that many of the symptoms of these psychological issues are identical to those of a magnesium deficiency: irritability, anxiousness/nervousness, inability to focus or concentrate, sleep disturbances, and memory problems. And while correlation does not equal causation, and there are likely numerous factors at play, it is also interesting to note that dietary magnesium intake has steadily decreased over the last 100 years, from around 500 mg/day in 1900 to an average of 250 mg/day today, which experts say puts a large number of us at risk of a deficiency.

Magnesium may not be the first nutrient that comes to mind when you think of brain health, but it turns out that this mineral is an incredibly important nutrient for our brains. It’s required for proper neurotransmitter production and function, it modulates the stress response, and it strongly infl uences brain plasticity, our brain’s ability to change and form new communication pathways. It has been shown to enhance learning and memory, has been eff ective in treating depression and anxiety, and is being studied for its potential to “rewire” the brain to respond without fear and anxiety in cases of severe anxiety disorders like post-traumatic stress disorder (PTSD). The research is mounting, and magnesium is looking better all the time. Let’s take a look at some of the research.

According to a 2016 report from the National Institute of Mental Health, about three million teens aged 12 to 17 have experienced some form of depression, while 16 million adults have. Depression’s partner, anxiety, aff ects six million teens and 40 million adults, and the numbers only seem to keep growing. Magnesium can help with both. A study published in 2017 found that supplementation with 248 mg of elemental magnesium for six weeks resulted in a “clinically signifi cant” improvement in depression scores among 126 moderately depressed adults. The positive eff ects were observed within two weeks. The researchers used a patient health questionnaire that is commonly used to make a diagnosis of depression to measure scores of depression; after the six-week trial, depression scores dropped on average by six points, from moderately depressed to mildly or minimally depressed. Anxiety scores also improved. Magnesium is involved in the production and function of mood-regulating neurotransmitters, including serotonin, and is also known to reduce infl ammation, which is believed to play a role in depression.

Like other mental disorders, diagnoses of ADHD are also steadily increasing—between 2003 and 2011, diagnosed in children increased by 42 percent. Characterized by an inability to pay attention and stay focused, diffi culty controlling behavior, hyperactivity, mood swings, and impulsivity (also all common symptoms of magnesium defi ciency), this brain disorder can interfere with school, social, and home life. Multiple studies have shown that children with ADHD are likely to be magnesium deficient and that supplementation improves symptoms. A study published in 2016 recruited 25 children between the ages of six and 16 who had ADHD and matched them with 25 controls. Seventy-two percent of the children diagnosed with ADHD were magnesium deficient, and the deficiency was more prevalent in males compared to females. The magnesium-deficient children were then divided into two groups, one group received 200 mg of magnesium a day in addition to their standard medical therapy, while the other group received standard medical therapy alone. According to the researchers, the supplemented children had “a highly significant” improvement in hyperactivity and impulsivity and a “significant” improvement in inattention. None of these improvements were seen in the group receiving only standard therapy.

Brain plasticity is the brain’s ability to form new communication pathways, or synapses, between neurons. Synapses are how neurons communicate, allowing us to learn new things and form and retain new memories, but as we age the synapses become less plastic, or flexible. Thinking slows, learning a new concept becomes more difficult, and memories may be lost; in other words, there is a loss of cognitive function. It has long been thought that there wasn’t much to be done about this loss of plasticity, that it was simply an inevitable part of aging. Enter magnesium. Magnesium has been found to be a “critical factor in controlling synapse density and plasticity” and a recent human study shows how important magnesium is for general cognitive function. The study included men and women, aged 50 to 70, who reported cognitive impairment, including memory and concentration problems. Half of the subjects took a unique form of magnesium, magnesium L-threonate, which has the ability to cross the blood-brain barrier, and half were given a placebo. All subjects were evaluated at six and 12 weeks. By the end of the study, those receiving magnesium L-threonate had a significant improvement in cognitive function, including improved executive function (e.g., time management, planning, attention, and focus) and improved long-term and short-term memory. Remarkably, magnesium supplementation also reversed brain age in the subjects by an average of nine years. The discovery that magnesium increases synaptic plasticity and has led researchers to explore the mineral as a potential way to “rewire” brains affected by traumatic fear and anxiety, such as in phobias, PTSD, and other extreme anxiety disorders. It is believed that elevated levels of brain magnesium can create new synapses and communication pathways that are not influenced by fear and anxiety, thus altering behavior.

With the impressive role it plays in the brain, magnesium really should be at the top of the list of brain health supplements, especially with a large portion of the population falling into deficiency territory. It is a safe and well-tolerated supplement for children and adults alike (the most common side effect is loose stools, which results from taking too much or taking a form that is not well absorbed). To support brain function, look for magnesium L-threonate, which has the ability to cross the blood-brain barrier and effectively increase brain levels of this mighty mineral.

Save Your Skin
Read More