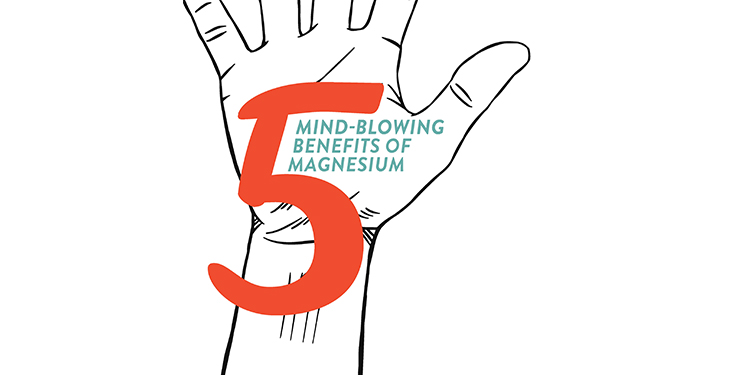 The magical mineral magnesium is essential to human life. It plays a central role in almost every bodily process and is a cofactor in more than 300 enzyme systems, making it a key player in numerous biochemical reactions in the body, including muscle and nerve function; reproduction; blood pressure regulation; DNA, RNA, and protein synthesis; and cellular energy production. We cannot survive without it, yet around 50 percent of the population has an inadequate intake, putting a considerable number of people at risk for deficiency.

According to research published in the BMJ Journal, hunter and gatherer societies of the Paleolithic era consumed a diet containing about 600 milligrams of magnesium per day, a number that far exceeds the average daily magnesium intake of today, which is approximately 270 milligrams a day for a 150-pound person. Not only is the modern intake of magnesium much lower than those of our ancestors, but it’s also lower than the recommended daily allowance (RDA) of magnesium, which is between 300 and 420 milligrams for most people (and many experts believe these amounts simply prevent an outright deficiency and are not adequate for optimal health).

Are stress and anxiety recurring themes in your life? Magnesium may be the “chill pill” you need. Magnesium plays a role in regulating the hypothalamic-pituitary-adrenal axis (HPA axis), our stress response system, and deficiencies in the mineral have been shown to induce anxiety and HPA axis dysregulation in an animal model. Indeed, anxiety is one of the physical symptoms of a magnesium deficiency. In humans, magnesium can suppress the release of the stress hormones cortisol and adrenaline and work at the blood-brain barrier to possibly prevent stress hormones from entering the brain.

The brain’s ability to change is neuroplasticity. This flexibility allows our brains to forge new neural connections (synapses) and affects learning, memory, behavior, and general cognitive function. Neuroplasticity plays a fundamental role in how well our brains age, with a loss of plasticity resulting in a loss of cognitive function. Research on neuroplasticity is growing and scientists are discovering that increasing neuronal cell magnesium levels can increase synapse density and plasticity, improving overall cognitive function. It is also showing promise to help “rewire” the brain in cases of traumatic brain injury and anxiety disorders. But not just any magnesium supplement will do—magnesium L-threonate is the form used in studies because it has the ability to cross the blood-brain barrier to effectively increase magnesium levels in the brain.

As you’re probably coming to understand, magnesium is essential for healthy brain and nervous system function; this also includes attention and focus. Some of the symptoms of magnesium deficiency can manifest as irritability, restlessness, a lack of concentration, and fatigue, also symptoms associated with attention deficit hyperactivity disorder (ADHD). Studies have consistently found that children diagnosed with ADHD are deficient in magnesium and that supplementation improves behavior, impulsivity, and hyperactivity. Magnesium also interacts with gamma-aminobutyric acid (GABA) receptors, helping to maintain normal transmission of this calming neurotransmitter, while balancing levels of glutamate, an excitatory neurotransmitter.

Research shows that increasing magnesium intake may also reduce inflammation, an immune response that can contribute to a laundry list of health problems and chronic diseases, including anxiety and depression. Studies have shown that both children and adults who consume less than the RDA of magnesium are, on average, twice as likely to have elevated levels of C-reactive protein (CRP), a strong indicator of inflammation, compared to those who consume the RDA. A study published in The Journal of Immunology found that magnesium has a modulatory effect on the immune system and is able to reduce inflammatory cytokine production. This means that consuming more magnesium can help to reduce the inflammatory factors that can lead to disease.

Some Of The Best Magnesium-Rich Food Options Include:

There are a number of reasons why magnesium deficiency is a widespread problem today: Soil degradation has drastically lowered the magnesium content in our food; the modern Western diet is loaded with processed foods that contain little to no magnesium and other important micronutrients; the heavy consumption of phosphorous-containing soft drinks depletes magnesium; common digestive issues hinder the absorption of minerals; and medication use also reduces the absorption of magnesium. These reasons make it necessary for most people to supplement their diets with magnesium.

Magnesium supplements in citrate, chelate, glycinate, and chloride forms are better absorbed than those in oxide or sulfate forms. It’s important to note that taking magnesium supplements in high doses can have a laxative effect, so aim to have no more than 300 to 400 milligrams in one dose.  As previously mentioned, if your goal is to increase brain plasticity, magnesium L-threonate is the best choice.

Another form of magnesium that you can easily use at home is Epsom salt, which is a mineral compound of magnesium and sulfate. I recommend adding Epsom salt to warm bath water and soaking in it for at least 20 minutes. This will help to boost magnesium levels, reduce inflammation, ease stress, and relieve constipation.

Magnesium is one of the most important minerals in the body and is needed to maintain optimal health, but an alarming number of people are at risk of a deficiency. If necessary, I suggest increasing your intake of magnesium-rich foods and turning to supplements—oral and/or topical—to ensure that you are getting enough of this vital nutrient and enjoying the health benefits that come with optimal levels

Some of the most common symptoms of magnesium deficiency include:

It’s important to note that some people are at a greater risk of magnesium defi ciency than others. This includes people with gastrointestinal problems who aren’t able to absorb magnesium properly; people with type-2 diabetes; the elderly; and people struggling with alcohol dependence. Also, people who aren’t eating enough magnesium-rich foods may not be getting enough of this important nutrient in their diet.

Could the Solution to Climate Change Be in Your Next Forkful Of Food?
Read More