Why Every Vegetarian Should Consume Turmeric...TODAY!

You’ve likely heard of omega-3 fatty acids before, also known as “omega-3’s,” or often referred to as “fish oil.” They are one of the most intensively studied nutrients on the planet, and for good reason. Omega-3 fatty acids are crucial nutrients for health, especially eicosapentaenoic acid (EPA) and docosahexaenoic acid (DHA). The fame and attention these fats have gained is in large part related to observations made in the late 1970s where epidemiological studies revealed that Greenland Inuits, who consumed copious amounts of fatty fish, had substantially better heart health compared with Western control subjects.1 These observations generated more than 4,500 studies to explore the effects of the omega-3 fatty acids EPA and DHA found in fatty fish on human health.2 These unique fats have since been studied for their role in supporting cognitive function, cardiovascular health, and modulating inflammation, and are easily obtained through diet and supplements.2 The vast majority of people obtain EPA and DHA through their diets by consuming seafood, fatty fish, or taking fish oil supplements. 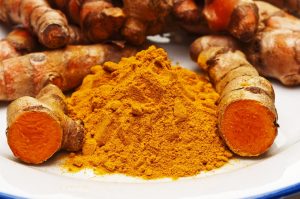 conversion of the biologically inert precursor ALA into the bioactive forms of EPA and DHA is very low (~5% for EPA and 0.5% for DHA). This results in lower concentrations of omega-3 in tissues of vegetarians and vegans than in omnivores. In fact, studies show vegetarians have 30% lower levels of EPA and DHA than omnivores, while vegans have 50% lower EPA and nearly 60% lower DHA.3 4

How then, do traditionally vegetarian cultures like those in India not end up with all sorts of health problems related to insufficient intake of EPA and DHA? Well, a study published just last year helps to explain some of this paradox and reveals the powerful synergy between two nutrients highly regarded for their ability to support heart health, brain health, and modulate inflammation.

In this study, researchers at the University of California Los Angeles were trying to better understand how turmeric and its active component, curcumin, support brain health. What they found was absolutely fascinating—consuming curcumin actually increases the cellular machinery necessary to convert ALA into EPA and DHA.5 DHA is especially important for brain health therefore, the study focused on DHA in particular.

Researchers found that simply by feeding both curcumin and ALA they were able to boost brain levels of DHA without actually having to include DHA in the diet. Looking beyond the brain, researchers were able to identify that curcumin feeding was also boosting levels of DHA synthesis in the liver, suggesting that this nutritional intervention could support more than just brain health.5 What is also important is that feeding ALA alone did not boost increase DHA levels, suggesting curcumin is essential for this process. This is great news for vegetarians or vegans who don’t have many dietary sources of DHA available, and can perhaps explain why many traditional diets are rich in turmeric.

In nutritional sciences we look for unique effects of nutrients that very few other dietary factors seem to mimic, and curcumin is one of the most unique nutrients around. That’s probably why, along with the omega-3 fatty acids, it is one of the most studied nutrients, with hundreds of studies published annually, many of them by top-tier universities highlighting its unique effects. These effects include, acting as a biofilm disruptor to support a healthy bacterial balance, functioning as an antioxidant, regulating the immune system so that it is not over or underactive, binding to heavy metals to limit their toxic effects, and much more.6 I guess we should add the ability of curcumin to boost DHA synthesis as another unique benefit of consuming curcumin!

It should be pointed out that there are certain strains of microalgae that naturally produce EPA and DHA.7 The oils harvested from these single-celled organisms are used to create dietary supplements containing “marine” omega–3 fatty acids and can provide vegans and vegetarians with EPA and DHA—however, they can be expensive and by choosing to boost your body’s natural DHA synthesis with curcumin, you are also harnessing all of the other amazing benefits of turmeric!

NOTHING IN THIS WEBSITE IS INTENDED AS, OR SHOULD BE CONSTRUED AS, MEDICAL ADVICE. ANY HEALTHCARE AND/OR NUTRITIONAL MATERIAL CONTAINED IN THIS WEBSITE IS FOR CONSUMER INFORMATIONAL AND EDUCATIONAL PURPOSES ONLY. SUCH MATERIAL IS NOT INTENDED AS MEDICAL ADVICE FOR CONDITIONS OR TREATMENT, NOR IS IT INTENDED AS A SUBSTITUTE FOR A MEDICAL EXAMINATION BY A HEALTHCARE PROFESSIONAL. CONSUMERS SHOULD CONSULT THEIR OWN HEALTH CARE PROFESSIONALS FOR INDIVIDUAL MEDICAL RECOMMENDATIONS.

Save Your Skin
Read More