For the Love of Organics: Celery

Victory greens! Imagine you’ve just won the Pan-Hellenic games in ancient Greece. Through feats of strength and speed, you’ve won, and you’re on top of the world. As the celebrations begin, a wreath is placed atop your head. A wreath made of… celery leaves?! It’s true—to be a champion in ancient times was to wear a victory crown of celery.1 It turns out the symbol of triumph in ancient times is also a champion of nutritional benefits.

Word on the street is that celery juice is a cure-all, super drink. Claims range from clearing acne, to healing gut and liver issues, and curing autoimmune diseases. Alas, there haven’t been proper scientific studies on the effects of celery juice to support these miracle claims. Some of the benefits people notice from drinking celery juice may be thanks in part to the nutrients in celery that have been studied, and even simply increasing one’s daily veggie intake. While it may not be a super-remedy, we do know that a vibrant green cuppa celery juice does still pack lots of benefits. Celery is a good source of vitamins A, B, C, and K, flavonoids, and electrolytes from its salt and water content; however, the downside of juicing is missing out on the rich fiber content of celery.2 3 4 Though more studies are needed on its juice, celery is indeed a veg to stock up on.

The Hidden Benefits of a Humble Veggie

Though it may sink into the background as a base in soup, or as a side on a plate of chicken wings, celery hosts some sneaky health benefits. Celery is 95 percent water and the other five percent is filled with antioxidants, vitamins, and fiber.5 A 2015 study on the effect of dietary water intake on skin health found that increasing your water intake, even through food, helps boost hydration levels.6 Combine the hydrating effects of the stalks with some antioxidant action from celery leaves and you’re set. The leaves that made wreaths in ancient times hold roughly 20 percent more antioxidant flavones than celery stalks, so be sure to incorporate those, too (try them in the Celery Blue Cheese Salad on the next page!).7 Between the water, antioxidant, and fiber content, celery helps keep your skin aglow, your body hydrated, and your digestive health supported.8

To get the most out of the celery you eat, it’s important to always choose organic. Celery has consistently been on the Environmental Working Group’s Dirty Dozen list, and a whopping 95 percent of celery sampled had pesticide residues while 85 percent of those contained traces of more than one pesticide on a single sample.9 10 11 Interestingly, the flavone content in celery acts as a natural pesticide and helps to keep harmful pests and fungi—and the need for harmful sprays!—away naturally. Keep your ants-on-a-log snacks (that childhood favorite of celery with peanut butter and raisins) free from coats of residue and choose organic!

Tired of forgetting about the celery in the fridge only to find it limp and crunch-less after a few days? Make like the ancient Greeks and turn those unassuming stalks into a celery bouquet (to keep them fresh, that is). Cut off the bottoms and store your stalks in a jar of cold water in the fridge to keep this down-to-earth bouquet crisp and crunchy for longer. 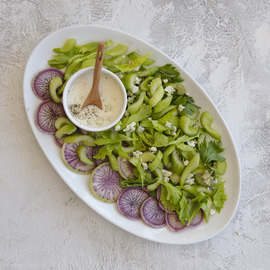 This quick and easy crunchy celery salad makes a perfect addition to summer cookouts and picnics.