Mushrooms are having a major moment. Named as one of Natural Grocers “Top 10 Trends of 2019,” the mushroom boom is showing no signs of slowing down. Like many modern-day health and wellness trends, this one is rooted in a long history of traditional use. Mushrooms have been used medicinally and culinarily in cultures around the world for centuries, but in the last decade or so, the amount of scientific research published on mushrooms has, well, mushroomed. And it turns out mushrooms hold the power to boost immunity, enhance brain function, reduce inflammation, and fight cancer. Mushrooms may be trending, but with the plethora of health benefits they hold, they are a trend that’s here to stay.

Which Mushrooms are Right for You?

With the sheer number of mushrooms available these days, it may feel overwhelming to know which ones are right for you and your specific health goals. This is one of the things that makes mushrooms such an exciting area of research—while many of their health-promoting properties overlap, each one has its own unique ways to support health. Find the mushrooms best for you by trying different ones suited to your own health goals and needs; sometimes that means one particular type, but it also may mean mixing and matching different varieties. Have fun exploring the health benefits mushrooms can bring to you! 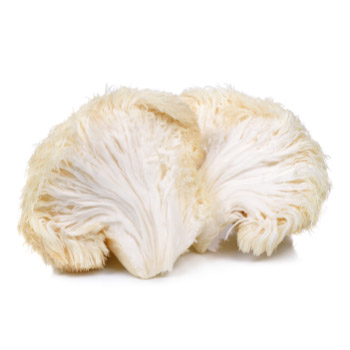 This puffy white mushroom that resembles a lion’s mane has been used as both food and medicine in East Asian countries for centuries, but today it has become synonymous with brain and nerve health. Both the mycelium (a mushroom’s equivalent of roots) and fruiting body (the mushroom) have been found to have neuroprotective and nootropic, or cognitive enhancing, effects.

One of lion mane’s most unique properties is its ability to increase nerve growth factor (NGF) and brain-derived neurotrophic factor (BDNF). NGF and BDNF are specialized proteins that play important roles in neuronal growth and health, allow neurons to communicate, and support neuronal plasticity, essential for learning and memory. Lion’s mane has also been shown to stimulate the production of myelin, the protective covering around nerves that allows nerve signals to be sent and received quickly and efficiently. Damaged myelin underlies some neurodegenerative diseases like Alzheimer’s and multiple sclerosis. Finally, lion’s mane has been found to promote nerve regeneration and functional recovery after severe nerve injury.1 2 3 4 5 6 Because of its multiple actions in the central nervous system, researchers are investigating lion’s mane’s therapeutic potential in cognitive impairment and Alzheimer’s disease. One placebo-controlled study of 50- to 80-year-old Japanese women and men with mild cognitive impairment found that lion’s mane improved cognitive function. The thirty subjects were spilt into two groups, one of which was given a supplement of lion’s mane powder (four 250mg tablets three times daily) for 16 weeks, while the other took a placebo. The group taking lion’s mane had significantly higher scores on a cognitive function scale compared with the placebo group, with scores increasing the longer the participants took the supplement. However, four weeks after stopping the lion’s mane, the scores decreased, suggesting that lion’s mane is effective in improving mild cognitive impairment, but only when taken long term.7

In one animal model of Alzheimer’s, the polysaccharides in lion’s mane were shown to be neuroprotective, significantly reducing oxidative damage and neurotoxicity and preventing cell shrinkage caused by amyloid beta proteins, a hallmark of the disease.8 Another animal model of Alzheimer’s found that an alcohol extract of the mycelium reduced amyloid beta plaque in the brain, increased NGF, and promoted neurogenesis in the hippocampus, a region of the brain responsible for emotions and memory.9 And finally, a recent study supplemented aging mice with an extract of lion’s mane mycelium and fruiting body and confirmed that it promoted neurogenesis in the hippocampus and the cerebellum, while also improving recognition memory, the ability to recognize previously encountered people, events, and objects.10 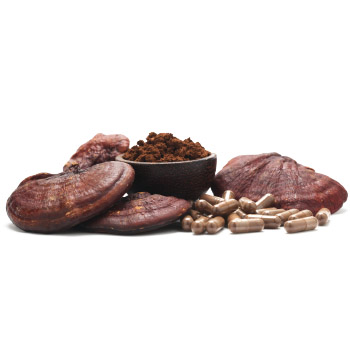 Reishi, also known as the Queen of Mushrooms, contains hundreds of different bioactive compounds that exhibit antioxidant, anti-inflammatory, anti-tumor, and immuno-stimulating activity. It has been used as a medicinal mushroom for more than 2,000 years, and in Traditional Chinese Medicine (TCM) it is used to replenish and strengthen Qi, or “life force,” to calm the mind, and to treat respiratory conditions and insomnia.11 Even today, reishi is approved by China’s equivalent of the FDA to treat insomnia, chronic hepatitis, chronic bronchitis, and coronary heart disease.12 Western science has largely focused on its role in immunity and cancer, with promising results.

A number of studies have found that reishi—including the fruiting body and the mycelium—contain polysaccharides that can enhance immune function and activate the immune response. Research has shown that the polysaccharides in reishi are potent immunomodulators that exert “a significant and comprehensive impact on immune cells…” including enhancing the proliferation and maturation of natural killer (NK) cells, lymphocytes, macrophages, and dendritic cells, which act as messengers between the innate and adaptive immune systems. Reishi polysaccharides have also been shown to exhibit antiviral and antibacterial actions.13 14

In China, reishi is used as a standard treatment for insomnia, and animal research has demonstrated that the fruiting body of reishi does significantly increase total sleep time and non-rapid eye movement (NREM) sleep, or deep sleep.15 In other research, a well-controlled human trial found that an extract of reishi was an effective treatment for “neurasthenia,” a medical condition characterized by physical and mental exhaustion, accompanied by headache, irritability, and sleep disturbance (in other words, a typical stress response). Eight weeks of supplementing with a reishi extract at 1,800 mg three times daily resulted in a significant improvement in symptoms, including fatigue and in overall sense of wellbeing.16 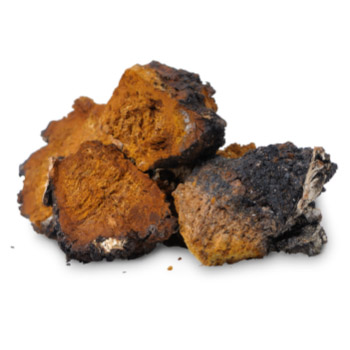 This fungal species has a long history of use in Russia and Siberia. It is unique in the mushroom world in that it manifests not as the fruiting body of the fungus, but as a mass of mycelium. It has been used as a folk remedy for inflammatory digestive disorders, such as ulcers and gastritis, and as an antiparasitic and antiseptic; in modern times, it is revered for its antibacterial, antiviral, anti-inflammatory, antioxidant, and anti-tumor properties.17 Chaga is one of the single richest sources of antioxidants found in nature, far surpassing other antioxidant-rich foods like raw cocoa powder, dark chocolate, blueberries, and spinach.

Chaga extract has a history of use in Soviet Russia as a treatment for chronic gastritis and gastric ulcers, and when used in conjunction with traditional therapy for gastric ulcers, was reported to reduce hospital stays and double the length of remission.18 In more recent research, scientists found that an alcohol extract of chaga reduced oxidative damage to white blood cells by 54.9 percent in patients with inflammatory bowel disease, including Crohn’s and ulcerative colitis,19 and an animal model of colitis found that a water extract of chaga significantly inhibited inflammation in colon tissues, reduced oxidative damage, and suppressed damage to the mucosal lining.20 Other research has shown that an alcohol extract of chaga has general anti-inflammatory and pain-relieving effects.21

Chaga’s health-promoting properties are attributed, at least in part, to the large amounts of melanin that it contains (it’s what makes the fungus black); it’s the same melanin that’s found in the human body that is concentrated in the skin, eyes, and nervous system. These molecules are anti-inflammatory, antioxidant, and photoprotective (i.e., they protect against UV damage). The melanins found in chaga in particular “exhibit high antioxidant and gene-protecting properties.”22 23 Another compound found in chaga is betulin, and its derivative, betulinic acid, which has antiviral, anti-inflammatory, and antioxidant properties, as well as anti-tumor properties, including promoting cancer cell death.24 25 26 27 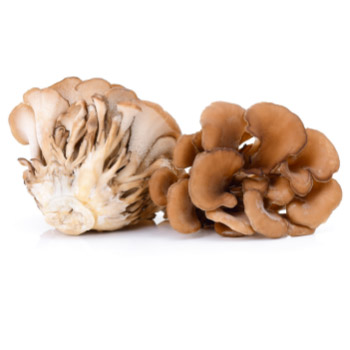 Maitake loosely translates from Japanese to “dancing mushroom” in English, which according to folklore, came from the happy dance people did when they found maitake in the wild. Maitake mushrooms are found in Japan, China, and throughout North America. Like other medicinal mushrooms, maitakes contain compounds that support the immune system and have anti-tumor, antioxidant, and anti-inflammatory properties.28 29 30

It also contains a unique bioactive compound—SX-fraction—that scientists have discovered has a profound effect on the cluster of symptoms known as metabolic syndrome, which includes excess weight, high blood sugar and insulin, and elevated cholesterol and triglyceride levels. An animal model of type-2 diabetes found that an extract from the fruiting body of maitake significantly decreased weight, fasting blood glucose, insulin, triglycerides, and cholesterol, while increasing the activity of superoxide dismutase (SOD) and glutathione, powerful antioxidants produced in the body.31 Other research investigating the effects of whole powdered maitake, as well as both alcohol and water extracts, has found similar results, with reductions in blood glucose and insulin levels, improvement in insulin sensitivity, and reduced blood pressure.32 33 34 35 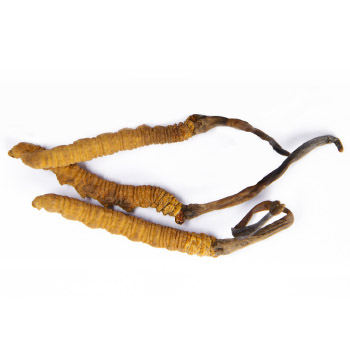 This parasitic fungus is found at very high altitudes (12,000+ feet) and grows from the bodies of caterpillars, which it mummifies as it grows. It has long been valued in Chinese and Tibetan medicine, with some traditional healers in the Himalayas recommending it for all illnesses, claiming that cordyceps improves energy, stamina, libido, and endurance and promotes longevity. It has been used traditionally to treat asthma, bronchitis, diabetes, erectile dysfunction, liver disease, and cancer.36 Modern research has investigated some of these claims and as one scientific review of the biological and pharmacological properties of cordyceps states, “Scientific proof of the effects of the Cordyceps mushroom seems to be quite promising and coincide with the folk practices of … parts of India, China, Nepal, and Bhutan.”37

In modern times, cordyceps is used in China to restore health after illness and to speed recovery from exhaustion. One animal study found that an extract of the mycelium significantly increased the swimming time of mice by activating metabolic regulators, including AMPK, an enzyme known as a metabolic “master switch” that regulates how energy is produced and used in the body; activation of AMPK increases glucose uptake, fat burning, and mitochondrial biogenesis. The researchers concluded that cordyceps “can be used as a potent natural exercise mimetic” (i.e., imitator).38 Other research has shown that a cultured extract of cordyceps improves liver energy metabolism and blood flow, as well as increases ATP production (ATP is what our cells use to produce energy) in an animal model of iron-deficiency anemia, a common cause of fatigue in humans.39 Human research has shown that long-term supplementation with cordyceps (studies have used between one and four grams daily for at least three weeks) enhances blood flow and oxygen utilization and decreases time to exhaustion during high-intensity and aerobic exercise.40

About 90 percent of mushrooms consumed in the U.S. are white button mushrooms (WBMs),41 and you might be surprised to learn that even these common mushrooms are “powerhouses for boosting the immune system,” according to one researcher. For example, WBMs have been shown to enhance natural killer cell activity—the white blood cells that play a key role in fighting off infections and tumors.42 This common variety of mushroom was also recently shown to act as a prebiotic for beneficial gut bacteria and to enhance glucose sensitivity via positive changes in the gut microbiota.43