For The Love of Organics: Ginger

As the hot summer days unfold into a crisp fall, we begin to crave those warming autumnal spices, perhaps none more beloved than ginger. It’s hard to imagine a fall season without it: pumpkin spice lattes and pies wafting through the house, stir-fries and chai enjoyed in the backyard under falling yellow and crimson leaves, sticky little fingers pressing people-shaped cookie cutters into spicy-sweet gingerbread dough—none of these delicacies would be the same without ginger. For more than 5,000 years, people have consumed ginger for its delicious zing and nutritious benefits that support wellbeing in myriad ways.

A superfood worthy of the title, it’s no wonder ginger is used in traditional medicinal practices all over the world. Here is just a little taste from around the globe:

Indian Ayurvedic medicine, which has been around for more than 3,000 years, uses ginger’s warming nature to stimulate digestion. Other important Ayurvedic uses include support for the immune and cardiovascular systems, pain management, including arthritis and menstrual pain, radiation protection, and as an anti-inflammatory. India also happens to be the world’s number one producer of ginger.1 2 3

Use of the spicy rhizome dates to 4th century B.C. in China. Ginger is a yang herb (hot, warm, active energies) used extensively in Traditional Chinese Medicine (TCM) for its beneficial nutrients including iron, magnesium, vitamin C, and phenolic compounds like gingerol. Gingerol is known for its high antioxidant and anti-inflammatory effects. In TCM, ginger is recommended for stomach aches, toothaches, warming the body, improving a weak pulse, and as a neuroprotectant.4 5 6

Like TCM and Ayurveda, Iranian Traditional Medicine (ITM) also uses the elements to bring balance to the body. With its fiery spice, ginger is considered a fire herb. ITM recommends ginger for supporting brain function and boosting memory, lethargy, respiratory wellness, joint pain, alopecia, as a digestive aid, and an aphrodisiac.7

As Above Ground, So Below the Surface 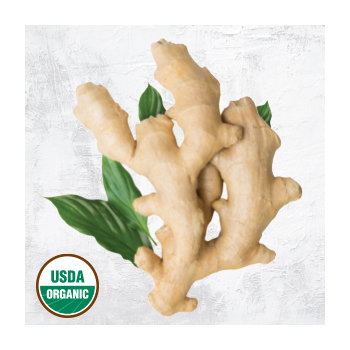 While the knobby root we know and love grows under the soil, vibrant yellow and deep pink flowers burst through hardy leaves on the surface—a beautiful plant grows a nutritious, albeit gnarly looking, herb. Ginger is often grown as a single crop and is sometimes grown alongside citrus and guava trees to create shade. Organic farmers in India rotate their ginger crops from year to year—crop rotation and refraining from using chemical sprays is part of what helps organic farming practices grow produce with higher nutritional values.8

When it comes to ginger, what is sprayed above ground seeps through the soil. There are 40 different herbicides, fungicides, and insecticides known to be sprayed on conventional ginger crops; of these sprays, 36 have been linked to chronic health problems, and 18 of those are acutely toxic, putting farmworkers at risk. Choosing organic ginger means supporting the wellbeing of the people who grow and harvest our food.9

Spice things up a little this fall, and make sure to include organic ginger on your next shopping list! 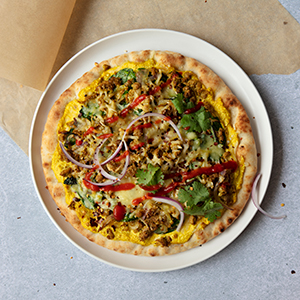 A delicious new take on pizza that can be on the table in less than 30 minutes! Shortcuts like our frozen Natural Grocers® Brand Organic Wood Fired Pizza Crust and organic ground turkey bring the dish together in no time—but there’s no shortcut on flavor!