Populations of pollinators are in serious decline worldwide. Here’s how you can help.

Imagine a day in the life of a healthy eater. Maybe you start with a bowl of Greek yogurt topped with chopped nuts and berries along with a hot mug of coffee. Lunch is a salad of mixed greens with avocado, cucumbers, and strawberries. You snack on some almonds and chocolate in the afternoon. Dinner is eggplant parmesan and a side of steamed broccoli with a squeeze of lemon juice.

These foods wouldn’t make it to your plate without the help of pollinating insects.1 Yet for the last few decades, scientists have been reporting a steep drop in worldwide populations of pollinators, which include everything from hummingbirds, bats, butterflies, moths, and, of course, bees.

More than 75 percent of the world’s major food crops rely at least in part on pollination by insects while nearly 90 percent of all wild flowering plants depend on pollinators3 4, and it is estimated that honeybees are responsible for between $12 and $20 billion worth of crops in the United States each year.5 6 Pollinators are also essential to alfalfa crops, a major food source for dairy cows and an important supplemental feed for grass-fed cattle in winter months, so pollinators are important for foods like grass-fed meat and pastured dairy as well.

An often overlooked impact of the decline in pollinator populations is the potential loss of micronutrient-dense food. While staple crops such as corn, wheat, potatoes, and rice do not require insect pollination, they are poor sources of  micronutrients. A study published in the journal PLOS ONE estimated that 98 percent of vitamin C, 55 percent of folate, and 98 percent of the carotenoids beta carotene and lycopene come from animal-pollinated plants. “The yield increase attributable to animal-dependent pollination of these crops is significant and could have a potentially drastic effect on human nutrition if jeopardized,” the researchers wrote. 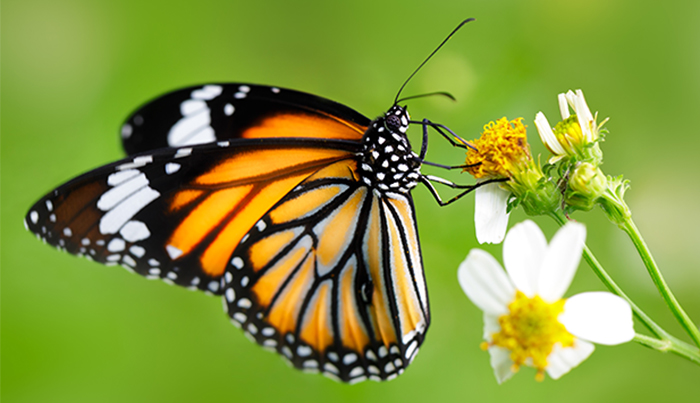 American entomologist and Distinguished McKnight University Professor at the University of Minnesota, Marla Spivak,9 discussed in a TED Talk how honeybees specifically have been in decline since World War II. In 1945, the population was about 4.5 million hives of bees and by 2007 that figure dropped to about 2 million. In 2018, the population was about 2.6 million, according to the U.S. Department of Agriculture (USDA).

Spivak says the decline is in large part due to a change in farming practices. “We stopped planting cover crops. We stopped planting clover and alfalfa, which are natural fertilizers that fix nitrogen in the soil, and instead, we started using synthetic fertilizers. And after World War II, we started using herbicides to kill the weeds on our farms. Many of these weeds are flowering plants that bees require for their survival.”

The use of synthetic pesticides, which covers a wide range of chemical compounds including insecticides, fungicides, and herbicides, took off in the 1950s. Today, more than one billion pounds of synthetic pesticides are used annually in the U.S.,12 with more than 20,000 such products on the market, according to the Centers for Disease Control and Prevention.13 One class of insecticides that have proven to be particularly problematic for bees is neonicotinoids.

“Neonics” were first used commercially in the late 1990s and have become the most widely used synthetic insecticides in the world. They are most commonly sprayed onto seeds, where they are taken up and distributed throughout the plant as it grows. Research has found that neonics disperse into the environment—residues have been found in soil, honey, and in the pollen and nectar of garden flowers and wild fl owers14—and can contaminate other crops, including cover crops that are planted to attract beneficial insects.15 They are considered a major contributor to colony collapse, and studies have shown that chronic low exposure to neonics can harm honeybees, bumblebees, and wild bees by impacting bee navigation, reproduction, colony development, queen production, and increasing pathogen growth in bees. Chronic exposure can also harm other beneficial insects such as ladybugs, earthworms, butterflies, and beneficial wasps.

Neonicotinoids aren’t the only pesticides harmful to bees—glyphosate, the active ingredient in the herbicide Roundup, was recently found to alter honeybees’ gut microbiota, increasing their susceptibility to pathogenic infection. Researchers at the University of Texas at Austin exposed honeybees to glyphosate at levels known to occur in crop fields, yards, and roadsides. Within three days, exposure to the herbicide significantly reduced healthy gut bacteria in the bees, specifically, a species critical for processing food and defending against pathogens. When compared to bees with healthy guts, the bees with altered gut microbiota were more likely to die when exposed to a common bee pathogen.

The widespread use of glyphosate and other herbicides such as dicamba are also destroying many of the wild plants that pollinators depend on for food. Research has shown that doses of dicamba similar to those that “drift” from treated fields to surrounding areas delayed flowering and reduced the number of flowers in wild plant species; the plants affected by the drift were also less visited by pollinators.

A brand new review published this month in the journal Biological Conservation investigating the decline in insect populations revealed “dramatic” rates of decline, especially among butterflies, wasps, and bees. The author's listed habitat loss due to intensive agriculture and urbanization and pollution from synthetic pesticides and fertilizers as the top two drivers of the declines. “Habitat restoration, coupled with a drastic reduction in agro-chemical inputs and agricultural ‘redesign,’ is probably the most effective way to stop further declines,” the researchers wrote. “Unless we change our ways of producing food, insects as a whole will go down the path of extinction in a few decades.

Fortunately, the crisis can be averted. Organic farms, which do not use synthetic pesticides or fertilizer, and increase habitats and food sources, have been found to have a greater abundance and diversity of pollinators.

A new study from Sweden confirms that organic farming methods support pollinator populations. Researchers from the Center for Environmental and Climate Research (CEC) at Lund University found that bumblebee populations thrived on organic farms and were more stable over time and space than on conventional farms.

“This is the first large-scale study over the course of several years to show that organic farming has a consistent, stabilizing effect on pollinator diversity,” said Romain Carrié, a postdoctoral researcher at CEC.

The researchers looked at bumblebees, butterflies, and flowering plants throughout the growing season in 10 organic and nine conventional farms in Sweden. Their study showed that both growing more flowers in the field (which provide food) and the absence of pesticides helped stabilize pollinator populations.

Another study published earlier this year in Agriculture, Ecosystems & Environment found that organic wheat farms had about 30 percent more bees compared to conventional wheat farms, and a greater variety of wild bees.

When you choose organic food, you are choosing to be part of the system that prohibits the use of synthetic pesticides. Organic standards require producers to manage their farms in a way that fosters biodiversity and improves the environment. Organic farmers utilize integrative pest management to control problematic insects, which helps to promote environments that are beneficial to pollinators. They plant cover crops to suppress weeds rather than using toxic chemicals, which also provides food for pollinators. By supporting organic growers, you are also supporting a system that is actively working to protect pollinators and the long-term health of our food supply.

In addition to buying organic food, there are steps you can take to support pollinators in your own yard. Avoid using synthetic herbicides and other pesticides; plant a pollinator garden that will provide food to pollinators native to your area—just be sure to avoid plants that have been grown from neonic-coated seeds! Build a “pollinator hotel” (free DIY instructions are plentiful online). Additionally, contact your local city or county government and ask them to avoid using synthetic pesticides and flowers grown from neonic-coated seeds in public parks and public spaces; this goes for your local schools as well. And write and call your government representatives to ask them to support legislation that will protect our pollinators. After all, a healthy food system depends on the health of pollinators!

The Poison All Around Us

Synthetic pesticides are ubiquitous in our environments. According to the EPA’s latest numbers (released in 2017 for usage from 2008-2012) U.S. pesticide use totaled more than 1 billion pounds annually, with herbicides accounting for between 50 and 60 percent of all pesticides used.26 While conventional agriculture uses the bulk of synthetic pesticides, they aren’t restricted to agricultural use, nor are their harmful effects limited to pollinators.

Glyphosate is a notorious example. This herbicide is used everywhere. In parks, schoolyards, backyards, roadways, apartment complexes, shopping centers, under powerlines, and of course, in conventional agriculture, especially on genetically-modified crops. A study published in 2016 analyzing glyphosate use in the U.S. since the 1970s concluded that, “In the U.S., no pesticide has come remotely close to such intensive and widespread use.”

This popular weed killer, first registered for use in 1974, is now an ingredient in more than 750 products, including Monsanto’s bestseller Roundup. Its use is widespread in both urban and agricultural settings, and now, it and other glyphosate-based chemicals are being linked to non-Hodgkin lymphoma.

The chemical is especially insidious because under current guidelines, it is said to pose no harm to humans; because of this perceived “no harm,” it is often used haphazardly. However, research indicates that glyphosate damages health by interfering with metabolic processes disrupts a healthy balance of gut bacteria, is an endocrine disruptor, and damages DNA.

Glyphosate isn’t the only pesticide we’re routinely exposed to. In fact, most of us are walking around with multiple synthetic pesticide residues in our bodies that are associated with adverse health effects, including impaired brain development in children, impacts on reproductive health, respiratory issues, and cancer. For most people, pesticide exposure comes from food. A study published earlier this year in the journal Environmental Research showed that switching to an entirely organic diet for just six days dramatically reduced the number of synthetic pesticide metabolites in the urine of the subjects, including neonicotinoids, organophosphates, pyrethroid, and 2,4-D.

This study adds to a growing body of research demonstrating that eating organic food is one of the most effective ways to reduce our exposure to synthetic pesticides. Choosing organic also supports organic growers, environmental health, and long-term economic health.

Read more articles like this in our resource library!
Search our 200+ articles to learn even more
Author
Suzanne
Boothby
View Profile
Share

With Covid-19, Race Matters. Minorities are Being Hardest Hit by Coronavirus. What You Can Do Now to Protect Yourself.
Read More