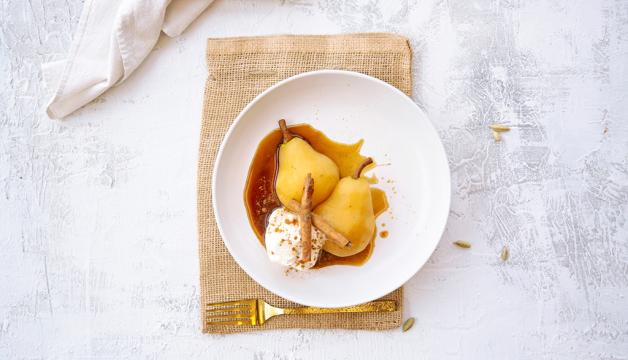 1. Using a mortar and pestle or the flat side of a chef’s knife, break up the cinnamon sticks, cloves or cardamom pods, and peppercorns a little. Combine the water, spices, and ginger in a wide skillet with straight sides or a large saucepan. Bring to a boil over high heat and then cover and reduce heat to low. Simmer for 8 minutes. Turn off the heat and add the tea bags, cover and let steep for 2 minutes. Remove the tea bags, squeezing to remove as much liquid as possible.

2. While the spices simmer, peel the pears, then cut them in half from top to bottom and use a spoon to scoop out the core. Use a knife to trim away any remaining blossom from the end opposite the stem.

3. Add the coconut sugar to the spice liquid and increase the heat to medium-high. Stir until the sugar has dissolved and then gently slip the pear halves into the liquid. Watch closely until small bubbles start to form and then reduce the heat to maintain a gentle simmer. Cook until the pears are tender when the tip of a knife is inserted, 25-45 minutes, depending on the pears, gently turning them occasionally as they cook. Adjust the temperature as necessary to maintain a gentle simmer.

5. Just before serving, combine the heavy whipping cream with ¼ teaspoon cinnamon and 1 teaspoon sugar. Whip until soft peaks form. Taste and add the remaining sugar as desired and whip until fully incorporated.

6. To serve, gently lift the pears halves from the liquid and place two on each serving plate. Top with a dollop of whipped cream.