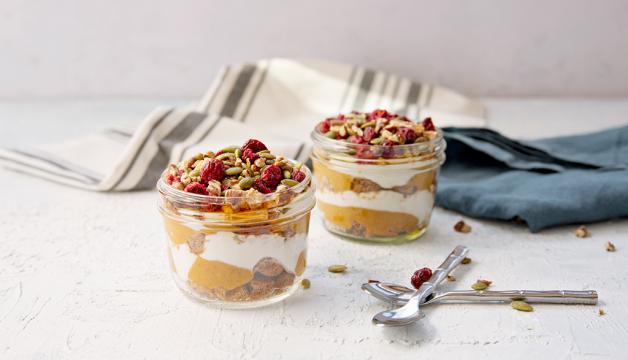 1. Combine about ¼ cup of milk with the arrowroot in a small bowl to make a slurry. Use a fork or small whisk to mix until smooth and no lumps remain.

2. Whisk the remaining pudding ingredients in a medium pot and bring to a simmer over medium heat, stirring occasionally. Once the mixture begins to simmer, give the milk and arrowroot slurry a quick stir and add to the pot, whisking as you do. Reduce heat as needed to maintain a gentle simmer and continue cooking, stirring frequently, until the mixture has thickened, 2-3 minutes.

4. While the pudding chills, prep the toppings you plan to use.

5. When you are ready to assemble the trifles, carefully open the chilled coconut milk from the bottom and pour out the coconut water (save for another use, such as smoothies). Scrape the remaining hardened coconut cream into the chilled bowl. Whip for about 30 seconds on medium until smooth. Add the maple syrup and vanilla and whip on high for another minute, or until the coconut whip is smooth and fluffy.

6. To assemble trifles: Place a layer of crumbled cookies in the bottom of 4 to 6 parfait glasses (or wine glasses or small glass jars). Cover with a layer of pudding, followed by a layer of coconut whip. Repeat with another layer of cookies, pudding, and coconut whip. Sprinkle toppings of your choice and cinnamon over the top of each. Chill for 1-2 hours before serving.

Browse All of Our Thanksgiving Menus