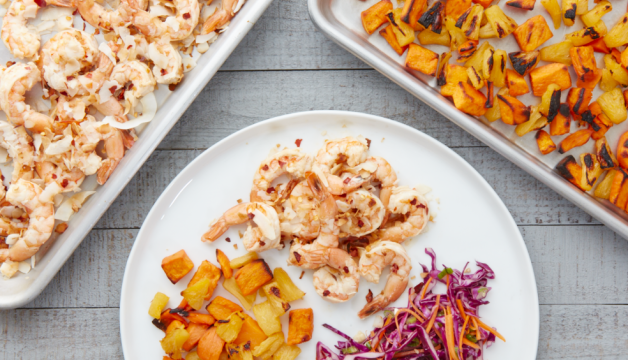 Break up the winter doldrums by adding a little tropical flair to your week with this simple meal! Succulent shrimp marinated in coconut milk and lime juice, sweet potatoes roasted with pineapple, and tangy slaw come together to make a mouthwatering good4u meal that will brighten up any cold winter day.

Tips for What to Do With Excess ingredients: Coconut milk can replace cow's milk in most recipes, and can be used in smoothies and curries. Coconut shreds can be added to yogurt, oatmeal, and trail mix. Cabbage can be added to any salad, and is deliciously sliced and roasted with a pat of butter and a sprinkle of cheese.