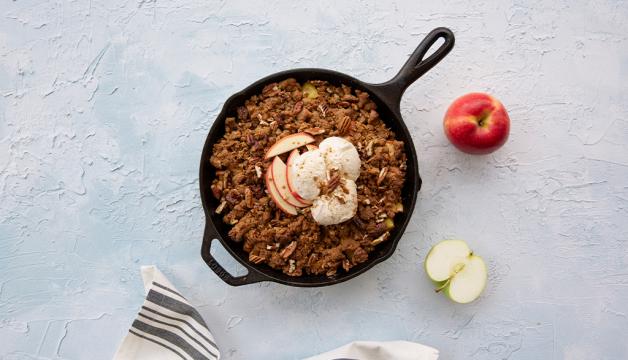 Who doesn’t love the flavors of apples and cinnamon baked to perfection with a crispy crumble topping? Yum! Made with prime-season organic apples and topped with a sweet and nutty crispy crumble made with our Natural Grocers® Brand Gluten Free All Purpose Flour, this delicious treat is not only gluten free, it’s also grain free, paleo friendly, and vegan!

2. For the filling, place a 10-inch cast iron skillet over medium-low heat and melt 3 tablespoons plant-based butter. Once the butter is melted, whisk in 1 teaspoon cinnamon and ¼ teaspoon salt.

3. In a large mixing bowl, toss the apple pieces with the melted butter, cinnamon, and salt. Once coated, add the apples back to the skillet and increase heat to medium. Cook the apples for 5-7 minutes, stirring gently every minute or so until the apples soften.

4. While the apples soften, make the topping. Melt the remaining butter. Stir the flour, coconut sugar, pecan pieces, and remaining cinnamon and salt together in a large mixing bowl. Stir in the melted butter until well combined for a crumble topping.

5. Remove the apples from the heat. Use your hands to crumble the topping over the apples and gently press down.

6. Bake for 35-40 minutes, until apples are tender and topping is crisp. Let cool for five minutes and serve with topping of your choice.